Big Hero 6
by Man of Action

This page is for Big Hero 6 (film), information. For other uses, see Big Hero 6 (disambiguation).

Big Hero 6 premiered on October 23, 2014 as the opening film at the Tokyo International Film Festival and the world premiere of the film in 3D took place at the Abu Dhabi Film Festival on October 31, 2014. The film's premiere in the United States was at the El Capitan Theatre in Hollywood, California on November 5, 2014.

The film was then released theatrically on November 7, 2014 in the United States, Canada, India, Vietnam, and Indonesia; December 26, 2014 in Australia and New Zealand; and January 30, 2015 in the United Kingdom and Ireland.

In the city of San Fransokyo, Hiro Hamada is a young robotics genius who spends his time participating in back alley bot-fights. One day, Hiro challenges mobster and crime boss Mr. Yama and wins by tricking him, making Yama furious and ordering his henchmen to beat up Hiro, who is saved by his older brother Tadashi before the thugs can harm him.

Escaping on Tadashi's scooter, both are soon arrested by the San Fransokyo Police Department along with everyone involved in the fight, but Hiro and Tadashi are released shortly afterwards when their aunt Cass bails them out and takes them back to Lucky Cat Café, their house.

Worried that Hiro is wasting his potential, Tadashi takes his brother to the lab at his university—the San Fransokyo Institute of Technology—where Hiro meets Go Go Tomago, Wasabi, Honey Lemon, and Fred. Tadashi then shows Hiro his latest project, a personal healthcare robot named Baymax. Hiro also meets Professor Robert Callaghan, the head of the robotics program. Amazed by the students' projects, Hiro decides to apply there. With help from his friends and Tadashi, Hiro invents Microbots, swarms of miniature robots he can control telepathically with a neural-cranial transmitter, in order to gain admission at an annual exhibition. Callaghan is very impressed by the Microbots and offers Hiro an invitation to the school. Alistair Krei, owner of the technology giant Krei Tech, is also impressed after his assistant had told him to take a look at Hiro's invention and offers to buy them, but Hiro refuses as Callaghan advised him it was better to continue developing them. Callaghan then gives Hiro the official invitation letter, making Hiro's family and friends leave and celebrate Hiro's success.

Hiro and Tadashi stay behind to talk for a short while as Hiro thanks his brother for believing in him. However, a fire suddenly breaks out in the exhibition and a student tells the Hamada brothers that Professor Callaghan is still inside. Due to this, Tadashi rushes in to rescue him as he said someone has to help. Hiro decides to go inside as well, but the building explodes before he can, so Tadashi (and presumably Callaghan) is killed. As a result of losing his brother, Hiro falls in depression and withdraws from others.

One day, Cass tells Hiro he would still be allowed to join SFIT, even though it has been a while since classes started, but Hiro feels more inclined to go back into bot-fights. While Hiro stares at his Megabot, the bot falls apart and stubs Hiro's toe, inadvertently activating Baymax, who soon tries to help Hiro against his will. Hiro soon discovers a twitching Microbot inside his hoodie's pocket, so Baymax thinks it is trying to go somewhere while Hiro thinks it is only malfunctioning because every other Microbot was destroyed in the fire. Still, Baymax follows the Microbot after Hiro said it would help improve his state.

Though Hiro was only being sarcastic on the command, he sees Baymax had actually left, so he follows him all over town to stop him until both arrive to an abandoned warehouse. There, Hiro actually becomes intrigued and both go inside, where they discover that someone has been mass-producing Hiro's Microbots, but are soon attacked by a masked man controlling the Microbots telepathically.

Realizing that the mysterious man stole them, Hiro tries reporting this to Sergeant Gerson, but Hiro's story was too crazy for him to believe. At that moment, Baymax's battery runs low so Hiro is forced to take him back home. After charging up, Baymax learns Tadashi had died and wants to help Hiro overcome his grief by calling his friends, but Hiro instead tells him he would improve if they could apprehend the masked man. He then realizes he can use Baymax to achieve this and upgrades the robot with a battle armor and karate moves, which he learns through a special chip created by Hiro. Back at the warehouse, they see it was left empty from any trace and at that moment, the Microbot starts twitching again, which both follow until they find the masked man at the harbor. Hiro and Baymax are also surprised by Go Go, Wasabi, Honey, and Fred, who did receive Baymax's message and tried to help Hiro as well. When the masked man discovers and attacks them, they flee in Wasabi's car being chased all over town until they are thrown to the bottom of the bay.

With the car sunk, Fred offers the gang to stay at his family mansion, where they are greeted by Fred's butler Heathcliff. Inside Fred's room, the gang start to ponder about the identity of the masked man, with Fred suggesting it can only be Alistair Krei behind it all. Hiro denies this, saying Krei is too high-profiled. Baymax then reveals he had scanned the masked man's vitals, so Hiro decides to upgrade Baymax further to scan the entire city to find him. Hiro also builds super-suits for himself and his friends to help avenge Tadashi by arresting the masked man.

After building and testing each of their suits, Hiro and Baymax fly around the city, scanning everyone and subsequently locating the masked man on a quarantined island. There, the group discovers a former Krei Tech lab that was experimenting with teleportation technology. The test went awry when one of the portals became unstable and the test pilot disappeared into it. Because of this, they supported Fred's theory that Krei is the masked man. When the masked man appears, they try to steal his mask, where they deduce the transmitter is located. They eventually succeed in unmasking him and learn he is actually Professor Callaghan, who explains he intentionally set the fire to steal Hiro's Microbots. Believing Tadashi died for nothing, Hiro angrily removes Baymax's healthcare chip and tells him to destroy Callaghan. The gang is able to stop Baymax and reinsert his chip, but Callaghan escapes in the process. Angry at them for intervening, Hiro leaves with Baymax. He tries to remove Baymax's healthcare chip once more, but breaks down when Baymax asks him if killing Callaghan will make him feel better. Baymax then plays recordings of Tadashi during Baymax's development. Hiro realizes that killing Callaghan would be against Tadashi's wishes and makes amends with his friends.

After examining more footage of the portal test, they discover that the test pilot was Callaghan's daughter Abigail and realize that Callaghan is seeking revenge on Krei, whom he blames for her presumed death. Using the Microbots, Callaghan repairs the portal device and uses it to destroy Krei Tech's new headquarters. The heroes arrive and battle Callaghan, destroy the Microbots and take the mask from him. However, the portal remains active and becomes increasingly unstable. As everyone runs away, Baymax detects life within the portal. Realizing it must be Abigail, Hiro and Baymax rush in to save her. However, debris inside the portal damages Baymax's armor and the only way to save Hiro and Abigail is to send them through with his rocket fist. Hiro refuses to leave Baymax behind, but Baymax convinces him it is the only option. Tearfully, Hiro states he is satisfied with his care and Baymax deactivates. Hiro and Abigail make it back through the portal and Callaghan is arrested. Later, as Hiro settles into Tadashi's old lab, he discovers Baymax's health care chip in the rocket fist. He rebuilds Baymax's body and reactivates him, then the two embrace each other. The six friends continue their exploits through the city, helping those in need.

In a post-credits scene, Fred, back at his mansion, talks to a photo of his father, wishing he was there so Fred could talk about the recent events. Fred then pushes the wall and discovers a secret door open that reveals a secret lair containing weapons, armor, and superhero gear. Fred's father then arrives and embraces his son with a hug, then tells him they have a lot to talk about.

The film has received generally favorable reviews from film critics and moviegoers. The film currently holds a 'Fresh' rating of 89% on Rotten Tomatoes, signifying great reviews.[3]

On February 18, 2015, the film's directors, Don Hall and Chris Williams, said that the thought of working with the characters again some day definitely has its appeal.[4] On March 2015, Génesis Rodríguez told MTV "There's nothing definitive. There's talks of something happening. We just don't know what yet."[5] On April of the same year, Stan Lee commented "After Ant-Man, we're going to start playing around with Doctor Strange, the Black Panther, the Inhumans, and then we have to come back for Guardians of the Galaxy 2, Big Hero 6, the Avengers, Captain America..."[6]

Later in August 2015, Roy Conli announced that Big Hero 6 would appear in the video game Kingdom Hearts III and said the story would take place after the events of the film.[7] However, the television series, Big Hero 6: The Series was announced in March 2016 as the official sequel, with the pilot "Baymax Returns" premiering on November 20, 2017 and taking place immediately after the film's events.

On August 2017, when asked if there was any active development for a sequel besides the series, Roy Conli commented "Yeah. Don and Chris are working on a new project. We haven't... We revisited it for a while and chose to kind of step back and let it settle for a while." Conli also said "They really have other stories that they want to tell, so they're thinking that they're going to take a little break right now and continue to work on a new story, and hopefully revisit it sometime. I think we all love it." As for the involvement of Big Hero 6 in Kingdom Hearts III, Conli said "We really felt that it was great opportunity to recreate a new story, as opposed to fitting into the story that was there."[8] 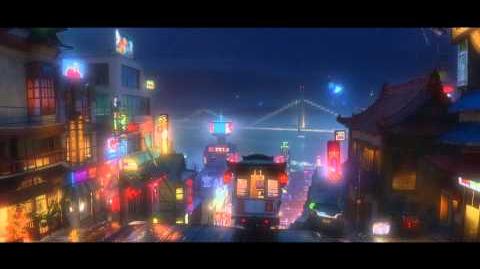 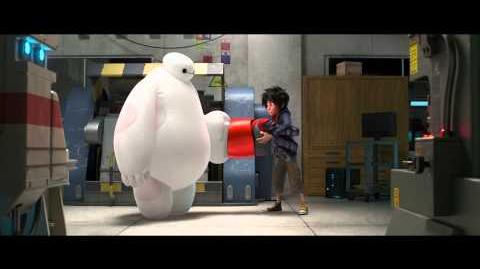 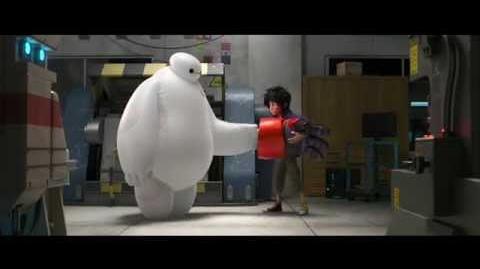 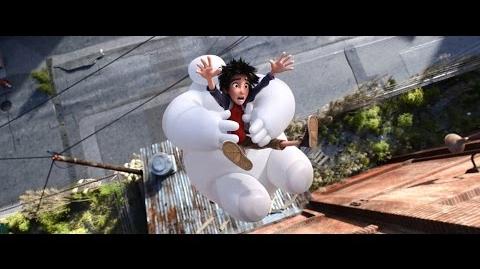 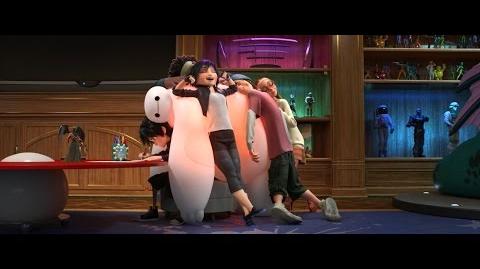 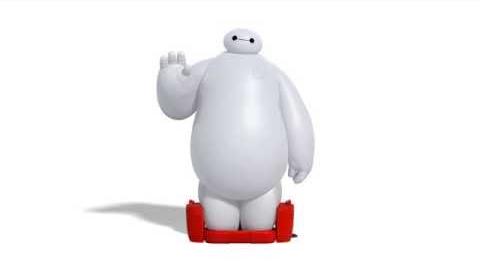 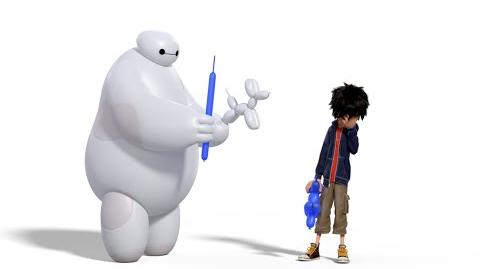 Baymax vs. Balloon
Add a photo to this gallery

The film features different sorts of references to other films and media.

Retrieved from "https://bighero6.fandom.com/wiki/Big_Hero_6_(film)?oldid=50914"
Community content is available under CC-BY-SA unless otherwise noted.