This page is for Cass Hamada, as depicted in the Baymax manga. For her main, movie counterpart, see Aunt Cass.

Cass Hamada is a character in Baymax. She is the owner of Lucky Cat Café and aunt to Hiro and Tadashi. 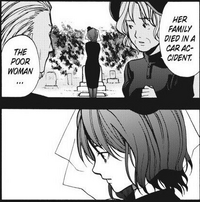 Cass is a relative of Hiro and Tadashi's parents. After her family died in a car accident, Cass had to take both Tadashi and Hiro with her as she was their only legal guardian. Falling into depression after this, Tadashi built a small robot to cheer Cass up, having promised himself that he'd never let his family go through grief again.

As Hiro grew up, Cass noticed how he was a young prodigy and wondered how it was possible since his parents weren't nearly as bright, according to herself. In time, people approached Cass to try recruiting Hiro into schools, although Hiro had no interest and instead played pranks on them to make them leave.

Because Hiro was anti-social, refusing to attend school and only cared about Tadashi, Cass hardly knew anything about the boy, since he didn't talk much to her; on the opposite, she had a better relation with Tadashi, who typically told her the things that Hiro would not.

Cass appears to get along with most people she meets and claimed she'd bring the entire neighborhood to cheer for Hiro during his SFIT presentation. As the owner of Lucky Cat, she is also a good cook as demonstrated when she made a triple-layered omelette for Hiro, despite Hiro not wanting it.

Above everything, Cass loves, supports and deeply cares for both of her nephews. Yet, because Tadashi took care of his brother for the most part while growing up, Cass didn't have good communication with Hiro, who often wouldn't listen to her and refused to eat carrots, which Cass insisted were necessary for him to grow healthy. After Tadashi's disappearance, this relationship became even more difficult, since Hiro would act rudely towards her whenever she tried cheering him up. However, despite this Cass never lost her temper and claimed to understand her nephew, but because of how little she really knew him, decided to leave him alone.

Eventually, after Hiro, Baymax and Tadashi's friends became Big Hero 6 and saved Abigail Callaghan, Hiro started to mature and realized that the way he treated with Cass was wrong, remembering that Tadashi didn't want her to go through grief ever again. It was then that Hiro apologized to her, and ever since, they developed a healthier aunt-nephew relation as they were the only family each other had left.