People getting in his way

This page is for Dr. Callaghan, the manga version of the character. For main film counterpart, see Yokai.

Robert Callaghan, as portrayed in the Baymax manga series, is an adaptation of the film antagonist of the same name.

Unlike his film counterpart, he is referred to as "Masked Man" rather than "Yokai", and only wears the kabuki mask to conceal his identity and protection instead of controlling the Microbots. 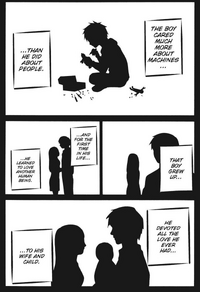 From his childhood, Robert Callaghan was a genius who enjoyed building robots, but did not care much about other people.

He received several awards for his inventions, and once met a woman named Sarah who criticized him because his machines were only made to impress people, but not to bring them happiness. Robert confronted Sarah, but this initial disagreement eventually led the two to fall in love and get married.

Callaghan's laboratory started receiving sponsors from all over the world, allowing him to become one of the most famous and respected figures of science, although he found himself too distracted by his work to miss the vital moments of his life, such as his daughter Abigail's birth. A year after this, Sarah died following a traffic accident. Upon getting told that Sarah had died only a few minutes before his arrival at the hospital, Callaghan then set his mind on creating a teleportation device so that he'd never lose time again.

After striking a deal with the military, Callaghan completed the Silent Sparrow project at an island used as a SFIT laboratory, having succeeded in testing it with animals. He then decided to have his own daughter Abigail be the first-ever human to use the portal, but it was then that the project malfunctioned and exploded, leaving Abigail inside.

Despite the loss of his daughter, Callaghan believed he could bring her back from the portal, assuming the machine simply didn't receive enough electricity using all of San Fransokyo's energy would allow it to stay open for long enough. Behind the scenes, he started rebuilding the machine and soon recruited Tadashi Hamada, who gladly helped him in secret at SFIT.

Callaghan also came up with a showcase at SFIT for students to present their research projects, with Callaghan himself being one of the chairmen at the showcase.

On the surface, Callaghan is a firm and efficient professor, equable and has a strong sense of academic integrity. He apparently looks out for his students' well-being, so much that he defends Hiro when the boy was accused of harming the student body with his invention, and was considerate of the individual feelings of his students. Calculating and observant, Callaghan is quite astute thus he is not influenced by assumption as easily as others.

However, the scholarly personality is but a façade; having lost the only two people he ever truly loved, Callaghan became more sociopathic and ruthless, consumed by his desires to have his beloved daughter back to the point that he was willing to kill the students he once supported.

Callaghan witnesses Hiro's Microbots attacking the SFIT campus until Hiro and Tadashi stop them. Professor Aquino points out that Hiro should be expelled because he knows it was his showcase project, but Callaghan stops him and asks how he could possibly know it was Hiro's project since they have to be kept a secret to prevent the showcase from being biased. This leads to Aquino to be suspended from the institute for 60 days, as punishment for tampering with the project.

When the day of the showcase comes, Tadashi presents his project: the healthcare robot Baymax, but still gives Hiro and his Microbots the first prize, and even offers Hiro to work at his lab. Hiro declines because he only cares about working with Tadashi, but this turns into an argument between the brothers that ends with Tadashi hitting Hiro and Hiro running back home, upset and angered.

Later, Hiro refuses to talk with Tadashi as he's still upset, but overhears him talking with someone (Callaghan) and leaving home in the middle of the night. Hiro follows him to SFIT, where he sees Tadashi working together with a mysterious Masked Man in the portal machine. Callaghan turns on the machine when he spots Hiro, who nearly gets sucked into it until Tadashi saves him. However, Tadashi is the one who ends up sucked inside the portal, while Callaghan doesn't help them.

Despite this, Tadashi tells Hiro "not to hold it" against the masked man as the portal collapses and Callaghan makes his escape.

Eventually, Hiro and Tadashi's robot, Baymax, go back to the SFIT lab but see that the portal has been taken away, and the only thing remaining is Tadashi's cap and a single Microbot of Hiro's. Both notice the Microbot is trying to connect with a core Microbot, and end up in an abandoned warehouse where more Microbots are being produced by the Masked Man. Both confront the villain and barely escape after he "self-destructs", soon noticing it was only a decoy. Hiro goes back home and tries to think of a way to fight him. Eventually, he realizes Tadashi wanted him to socialize with his friends, so he does this by asking them for help in fighting the Masked Man.

After giving everyone a special armor and some training, Hiro and his new friends face the Masked Man in the middle of the city where he attempts to turn on the portal machine once again. Hiro manages to take off his mask, finding out that his real identity is none other than Callaghan. Hiro then tries to beat him up in a rage while blaming him for Tadashi's disappearance, but Baymax stops him due to his protocols of stopping the harm of others, thus allowing Callaghan to escape.

After calming down and realizing Tadashi wouldn't have wanting him to hurt others, Hiro and the team track Callaghan down to the island where the portal was first built, finding out security footage of Callaghan's daughter going into the portal and realizing Callaghan just wanted to bring her back. Callaghan appears to attack the team, then talks about how Hiro reminds him of himself when he was young. Callaghan turns on the machine again, which now starts using the power from all of San Fransokyo's electric devices. Before Callaghan can finish the team off to stop them from defeating him, the team turns out to be Microbot copies, showing how Hiro had learned from their first encounter. Hiro and Baymax then redirect a lightning bolt directly to the portal, as Hiro figured all of the energy already used wouldn't be enough.

Callaghan is confused, and Hiro responds that he's willing to help save both Abigail and Tadashi, but without getting any more innocents involved or hurt. Hiro and Baymax then fly into the portal and detect Abigail still in the pod, but are unable to find Tadashi. When the portal is closing, Baymax launches Hiro and Abigail out with his rocket fist, sacrificing himself in the process. When the portal explodes, Callaghan shields Big Hero 6 with the Microbots.

He is then reunited with Abigail, who is happy about the experiment despite all that happened. Callaghan thanks Hiro and deeply apologizes for his actions, even going as far as confessing for all the damage he caused, although it is unknown whether he received punishment or arrest for it.