Helping people
His brother's genius
His friends and family

This page is for Tadashi Hamada (manga), as portrayed in the Baymax manga. For the main canon version of the character, see Tadashi Hamada.

Tadashi Hamada, as portrayed in the Baymax manga series, is an alternate adaptation of the film character of the same name. 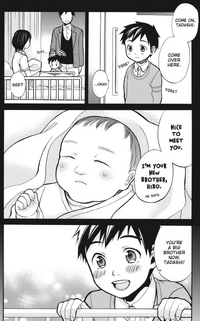 Tadashi was present at the birth of his brother Hiro, and some years later, the funeral of their parents when the couple died in a car accident. Noticing how his aunt Cass was deeply affected by this, Tadashi made himself a promise to never let his family go through grief again and started building robots to make people happy.

Growing up, Tadashi noticed how Hiro was a child prodigy and always felt proud of him, encouraging his genius. He however also noticed that Hiro was anti-social and only ever wanted to build things by himself. Because of this, he built a small aeroplane and took Hiro with him, claiming it was "their" experiment. Ever since, Hiro became closer to Tadashi to the point he became his biggest inspiration and followed him everywhere. Tadashi would also defend Hiro from other kids that bullied him for being smarter.

He eventually enrolled at the San Fransokyo Institute of Technology, befriending Go Go Tomago, Fred, Wasabi and Honey Lemon. Noticing that Hiro misused his intellect in activities such as Bot Fighting and didn't want to attend school, Tadashi offered him to skip several grades and attend the SFIT with him. Hiro agreed, but disliked Tadashi's friends and only continued to build things during class rather than pay attention. 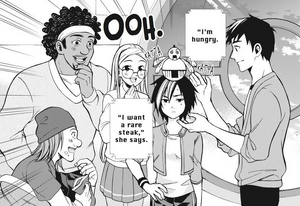 Sometime after this, Tadashi learned that Doctor Robert Callaghan was building a portal machine to save his daughter Abigail from a wormhole where she got trapped. Tadashi, having a strong desire to help everyone in need, agreed to help Callaghan, but keeping this a secret even from Hiro.

At the same time, Tadashi began building Baymax, his project for the SFIT showcase also held by Callaghan, although Tadashi also hoped Baymax would become a friend for Hiro. 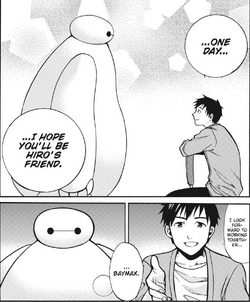 Tadashi is a humanitarian: he was affected by the death of his parents and watching his aunt grieve, he promised himself to never let his family go through anything like that again. This also extended to other people in general, as his inventions were usually built for the well-being of others.

With Hiro, he deeply cares about him but also tends to be harsh with him when he's stubborn. This has led to Tadashi hitting Hiro on some occasions. He has also shown concern about the fact that Hiro has openly admitted he's the only person in the world he cares about and "needs no friends"; he wants Hiro to be independent and go his own way rather than tagging along with him his whole life.

From childhood, Tadashi would also think of Hiro's genius as an opportunity to improve himself and have a friendly rivalry with his brother, even though Hiro always admired everything Tadashi created.

Even during his last moments before getting sucked into the Silent Sparrow portal, he smiled at Hiro and tried to encourage him further about making a better world, trying to keep his promise one last time.

Tadashi and Hiro are present at Professor Aquino's class when Hiro is distracted building things. Aquino confiscates Hiro's invention, but it sets off rockets all over the classroom. Aquino nags Tadashi about the fact Hiro shouldn't have been admitted at such an early age, though Tadashi assures him one day Hiro would make him and the entire city proud. After school, Tadashi helps a kid who scrapped his knee with a disinfectant bubble, which he says got inspired to build because Hiro hated getting bandages whenever he got hurt as a child.

At Lucky Cat Café, Tadashi gets angry that Hiro keeps hiding rockets everywhere, including their own home. Hiro then goes to his room to work on his SFIT showcase project, while Tadashi and Cass talk about Hiro's future. The next day, Hiro's Microbots project malfunctions at campus and causes damage. Tadashi saves Hiro, and Professor Aquino comes forward to accuse Hiro because it was his project, trying to have him expelled. Tadashi tries to take the blame, but Dr. Callaghan intervenes because he watched it all and forbids Aquino from expelling anyone, even pointing out that showcase inventions are private until presentation day and there's no way he should know it was Hiro's project in the first place. 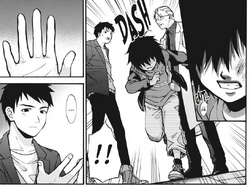 The following day, Tadashi hangs out with his friends. Hiro goes to ask if he's ready, but turns upset after seeing the others. Soon, Tadashi presents Baymax at the showcase with the help of Honey Lemon, who purposely trips to activate Baymax. In the end, Hiro's Microbots received the first place prize, and even Callaghan himself approached him to offer Hiro a job at his laboratory. Hiro declines, claiming there's no point if Tadashi isn't there. Tadashi says he had plans to transfer to another university in 3 months to study welfare, and how it's time for Hiro to start moving forward on his own. Hiro angrily yells that he doesn't care about the world or helping people, causing Tadashi to hit him in anger, with Hiro running back home upset. 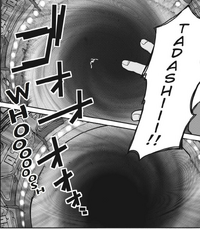 Later that night, Tadashi tries to call Hiro for dinner and apologize for not telling him anything about transferring schools, but finds him asleep and leaves. Soon, Tadashi talks with Callaghan about the portal project, worried that it could go wrong. He then leaves to SFIT to meet with Callaghan, unaware that Hiro overheard him and followed him. At the SFIT lab, the machine is turned on by Callaghan, who is wearing a masked costume and thus not recognized by Hiro. Hiro nearly gets sucked into the portal when Tadashi grabs his arm to save him. However, Tadashi gets hit by debris and gets pulled into the portal instead. Hiro also tries to save him, but Tadashi accepts the fact he's going to get sucked in no matter what and lets go of Hiro, telling him that he's proud of him and encouraging him one last time to make a better world.

After a week of Hiro grieving his loss, he accidentally activates Tadashi's invention Baymax. Both return to the SFIT lab, noticing the portal was gone and all that was left between the rubble is Tadashi's cap and one of Hiro's Microbots, which leads them to a warehouse where the same Masked Man from that night was building even more Microbots. Hiro recruits Tadashi's group of friends to fight and finds out Callaghan was the masked person, with Hiro blaming him for Tadashi's disappearance and trying to beat him up until Baymax stops Hiro from harming him.

The team goes back home, and Baymax shows Hiro recordings of Tadashi which change his perspective, realizing his brother wouldn't have wanted him to hurt others. Upon investigating further, Hiro finds out Callaghan was trying to save his daughter from inside the portal, so Hiro believes Tadashi could also still be alive inside it. He changes his plan to attack Callaghan and instead powers up the portal with a lightning bolt, in an attempt to rescue both Abigail and Tadashi. Baymax and Hiro enter the portal, but Baymax can only detect Abigail inside with no sign of Tadashi anywhere. As they're running out of time, Baymax sacrifices himself to get Hiro and Abigail out.

Sometime later, Hiro tries to resume his normal life, but after finding Baymax's programming chip within his rocket fist, rebuilds the robot and joins Tadashi's friends to become Big Hero 6. After having many adventures together, the Silent Sparrow portal is rebuilt once more, with Hiro and Baymax determined to go in once more to find Tadashi.